Get fresh music recommendations delivered to your inbox every Friday.
We've updated our Terms of Use. You can review the changes here.

by Hank Plank and the 2x4s 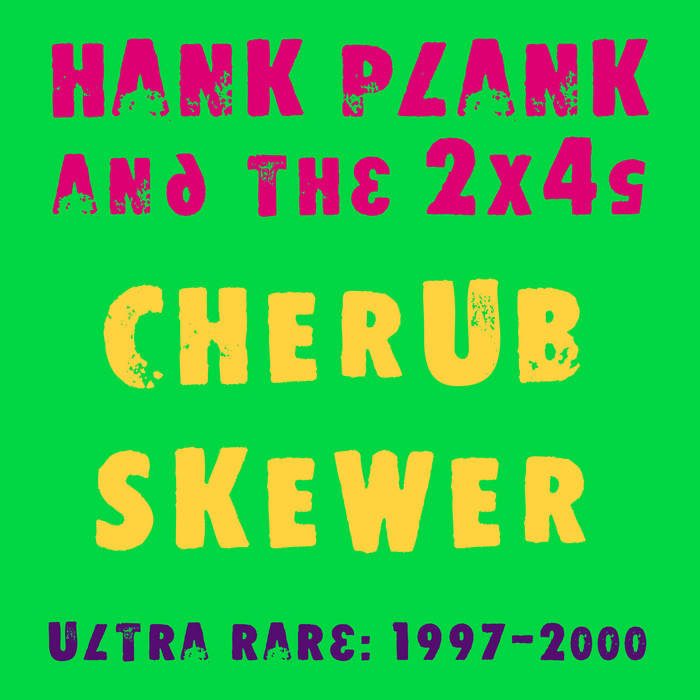 Hank Plank at Harvard
Recorded the day after a party at Ben's house. Featuring Matt Donahue, Matt Olken, Ben Herzog and Mark Yokoyama. Recorded at Quad Sound Studios, Cambridge, MA. Included from this session are a few old gems. "I'd Rather Be Alone" is presented in its "Angel is a Centerfold" version. It sounded country to us at the time. "Not in Love (Hit by a Truck)" was a cover of an Ultra Vivid Scene song that was a staple of our live set for years. By far the most country-sounding song from the session "Swinger" was essentially a remake of a Hank Williams tune with terribly misogynistic lyrics. Eventually Donahue refused to ever play that song again. Luckily? it was preserved here.

Billy and the Beaters Session
A change of time, place and personnell, the Billy and the Beaters session was recorded in Billy's garage in Hillsboro featuring Ben, Matt, Mark and Billy. "Pretty in Pink" we had never played before, but probably came out the best. "There Once Was a Time" was a song mostly written by Matt, but for some reason was sung by Mark at the session. (It was all recorded on 1/2" 16-track for you gearheads.) "See You That Way" was another punky early number that was abandoned early on, kind of an absurdist bondo number, maybe worse. "Brothers and Sisters" was a staple of the mini-Matt super set in early gigs, back when we used to switch instruments to play Matt songs. Mark plays drums on this song, Ben plays some mandolin on a bunch of the tracks from the session. Two things that pretty much never happened again. The hippies stole the mag light.

Dublin Pub 8/15/98, Third Set
"Orange Blossom Special" was a tune that we played with Juliana (Billy was gone by now). The Dublin Pub was the location of probably our first 30 paying gigs. Carl really had a soft spot in his heart for Juliana. Featuring blazing fiddle and a different story each time, this song was a real crowd pleaser. Intentional train wrecks are better than accidental ones. We have had more than our share of both.

Rose City Opry, Berbati's Pan, 1999
Organizing this event convinced Mark that organizing events was for chumps, but it all ended up working out pretty well. "Pothead's Prison Blues" was filled out by Ben "Bjorn" Brooks and Tom Niebrzydowski. "Plea" shows how bad we can play a good song. "Left Behind" is insanely fast. I guess we used to be insane. "Peg and Awl" was a fave rave-up with a jab at Nike for good measure. Listen to Matt freak out at the end.

Rock Creek Tavern
We recorded a couple of our shows out there. Same line-up. "Blackberry Blossom" was Bjorns requisite Blossom fiddle tune. "She Glows" is sung, with feeling, by Matt.

Venus Hair Trap Sessions
We spent about a year recording that record off and on. "Confused" is one of four songs that were eventually abandoned before we finished. It was later featured on a sampler. We never quite got it right.

Mad Hatter 2000
Recorded by Bruce Morris, who recorded our live album, these songs are from a few months later. As you can guess, "Space Monkey" was written on the fly and has never been played again. "The Cuckoo" has been an off-and-on staple of our set for quite some time now. Tom Heinl borrowed "Abilene" to write "Albany," which we stole from him. "Old Man from the Mountain" is an old favorite of ours. It's also exactly like "Ridin' Shotgun" except it's in a different key.

Ultrasound Consultation
Bjorn whipped up this version of "Rocket to Venus" for a special space-themed show we played in the summer of 2000. This is actually probably the only good song on this whole cd. Props to Bjorn!

Bandcamp Daily  your guide to the world of Bandcamp